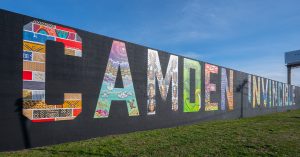 In partnership with the Camden Community Partnership, the City of Camden and the Commissioner Board have installed a mural by five local artists along Admiral Wilson Boulevard that embodies the history, grit and resilience of the county seat, which is the city of Camden. The mural was designed by the different artists who were tasked with installing individual letters for the piece.

“This mural has all of the hallmarks in the city I grew up in and the city that shaped me into the person I am today,” said Commissioner Al Dyer. “These letters represent the city, the history, the people and our local creative geniuses that designed and mounted this installation. I will take great pleasure in knowing that the thousands of cars that drive on this road daily, will pass this sign and know exactly where they are and who lives here.”

Below are the artists who contributed to the project:

Erik James Montgomery is a fine art photographer, educator, and “artivist” who focuses his lens on the pressing cultural and social justice issues of our time. Initially self-taught, Montgomery went on to study at the Academy of Art University and Columbia University. He has showcased his photography at various museums, galleries, universities and art events over the past 25 years. Erik’s fine art photography focuses on inspirational, cultural, societal themes. His viewpoint is from a photojournalistic perspective where his imagery tells a complete story in one image. Erik’s photography gives a visual voice to every one of his subjects thereby becoming a photographic storyteller and an important documentarian of this era. In 2011, Erik founded The Erik James Montgomery Foundation. The EJM Foundation is a non-profit organization dedicated to instructing youth and college students in the artistic development of professional photography.

Donald Williams was born and raised in the Camden City and holds a BFA from the University of the Arts in printmaking and art education. His artwork seems to gravitate towards themes that involve spiritual or humanitarian struggles, triumph and most of all, reality. Donald also loves music and a lot of his work features his musical idols or performers in the state of play. The materials he works with vary and include printmaking as well as many other mediums and styles including collages. Donald also specializes in portraits and loves to create quick, candid portraits of people which he later gives them as surprise gifts. Donald works as a freelance artist, is on staff at the Fireworks Art Gallery in South Camden and was a member of the A New View Artist Apprenticeship Program.

Terina Nicole is a New Jersey native and Camden City resident who creates beautiful, bold statement pieces for art and design lovers. She is the designer and founder of Jypsea Leathergoods, a line of luxe leather home goods, handbags and jewelry. Terina holds a degree in accessory design from the Fashion Institute of Technology in New York City, a bachelor’s in art from Thomas Edison State College and a master’s degree with a focus on design and craft from NJCU. Most recently Terina has co-founded a creative conference: DIYMakersCon, opened a fashion design studio and makerspace called The Fashion Design Center of South Jersey, located in Camden, NJ.

Priscilla Rios is a 21-year-old Puerto Rican woman who was born and raised in Camden City. Priscilla attended both Pennsauken Technical High School and Rutgers University. Priscilla began as a small “bedroom artist” who started off doing small drawings in her free time that then branched off into full blown paintings of self-expression, nature sceneries and abstract. You can see Priscilla’s full-scale mural “Lanternfly Bug” at 5th and Erie Streets in North Camden which she completed during her tenure with the A New View Artists Apprenticeship Program.

Breiner (Brein) Garcia is a native and resident of Camden. A jack of all trades, his passion is music, producing lofi, hiphop, metal, alternative rock music collaborating with several artists from throughout the state. Brein also expresses creativity through cartooning, acrylic paintings, ink sketches and digital art. Brein was a member of the New View Camden Artists Apprenticeship program where he worked closely with nationally acclaimed artist Josh Sarantitis, a muralist with whom he shares similar ideals. He has also worked with Sarah Kavage, a visual artist and urban planner, creating socially impactful natural art. Brein also finds joy in including nature in his artwork. With each project, Brien strives to help his community feel more connected through art, passion, energy, nature and unity.