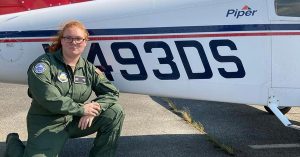 Sicklerville, NJ (October 27, 2021) – While most high school students spend their summer working or vacationing, Sarah Lovern, of Atco, spent it in the air earning her pilot’s license.

She is a senior at Camden County Technical Schools (CCTS) enrolled in the Air Force JROTC Leadership career program.

“Sarah has always been goal-oriented and sets the bar high for what she’d like to achieve,” said Lt. Col. Matthew Lacy, her Air Force JROTC/Leadership instructor. “She is an outstanding role model earning the rank of Cadet Major and serves as our unit’s Squadron Commander.”

The United States Air Force funded scholarships for Air Force JROTC cadets to attend a Flight Academy, a private pilot training at public/private universities this past summer. Only 150 cadets from throughout the United States were identified through a competitive boarding process, and those selected received a scholarship that paid for their airfare, room and board, collegiate academics, and flight hours required to potentially earn a Private Pilot’s License (PPL) through an intense, in-residence, 8-week collegiate program.

Completion of the program is singularly dependent on each student’s academic and flying ability and the university’s determination and judgment to recommend a student. Cadet Lovern attended Delaware State University for her training and earned her pilot’s wings in August 2021 when she was just 17 years of age after many solo and dual flights across, Pennsylvania, Delaware, Maryland, and Virginia.

Participants are under no military service commitment or obligation, nor does program completion justify acceptance to military service, ROTC scholarship, or military academy appointment. Applicants must have been at least 17 years old by 1 July 2022, obtained a minimum fitness assessment score of 50, and have had a minimum cumulative GPA of 3.0 or better (on a 4.0 scale) to be nominated. Lastly, applicants needed to have a “strong” interest in aviation and a “never-quit” attitude.

According to Lt. Col. Lacy, the Air Force JROTC four-year curriculum at CCTS consists of three components: Leadership Education, Aerospace Science which includes the opportunity to fly, and Health & Wellness. “The Aerospace Science portion laid the groundwork for Cadet Lovern’s success at the Flight Academy,” he said.

“There tends to be an assumption that JROTC is only for those who plan to go into the military. Actually, only about 2% of JROTC cadets nationwide go into the military. We teach the skills, values, and concepts a student will use no matter what future path they choose. First year cadets begin by learning how to ‘lead yourself’,” said Lt. Col. Lacy.  “Upper-class students get hands-on experience teaching and training others, supervising team projects, developing and implementing long-range plans.”

“I knew the JROTC at CCTS was the right choice for me when I first heard about it as an option for high school while in seventh grade,” said Cadet Lovern.  “At the time, I expected my time with my unit to better me as an individual and prepare me for my future, but there was no telling that the invaluable lessons of leadership, professionalism, aerospace, and character development that I have learned would lead me to the position I am today as a private pilot.”

“Lt. Col. Lacy, MSgt. Forman, my flight instructor Jay Shah, and all of my fellow cadets from our school and the flight academy, who are like family, motivated and supported me, and I couldn’t be more grateful,” said Cadet Lovern. “We shared many ups and downs along the way which only made us stronger as individuals and as a unit.  Colonel, Sarge, and others inspired and helped me, and gave me the greatest gift–the opportunity to pursue whatever future I envision and be a life-long learner.  The sky is not the limit for a JROTC cadet.”

At CCTS, Cadet Lovern serves as a student ambassador and is a member of the volleyball team, National Honor Society, National Technical Honor Society, Drill Team, and Kitty Hawk National Honor Society, the academic honor society of the AF JROTC.  She regularly performs community service and is currently applying to the Naval Academy for college, with the ultimate goal of commissioning as an officer in the Marines once she earns her Bachelor’s degree.