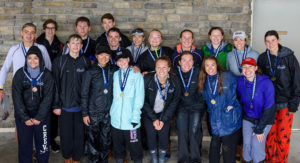 (Pennsauken, NJ) – The South Jersey Rowing Club, based out of the Camden County Boathouse, brought home a national title on June 11. The team of high school juniors and seniors sent five boats to the USRowing Youth National Championships in Florida this weekend, where 14 rowers competed in five different events.

The women’s double boat, commanded by Rachel Pierce and Rose Carr, finished first in the field after posting a time of 7:20.045 in the finals meet. Competitors in the women’s four, men’s four, women’s quad, and men’s quad, finished ninth, 11th, 18th, and 14th, respectively.

Freeholder Director Louis Cappelli Jr. highlighted the opportunities the boathouse offers to residents of the county and members of the surrounding community, like those who competed this weekend.

“It’s moments like this that are why we wanted the boathouse in the first place,” Cappelli said. “Without a place like this, these young adults wouldn’t have a place to practice and compete, and wouldn’t have been able to accomplish what they did down in Florida. We want to congratulate all of the athletes who competed in the National Championships, and we hope that everyone has the opportunity to find something that fits their interests at the boathouse.”

The South Jersey Rowing Club trains daily on the Cooper River, and is based out of the Camden County Boathouse in Pennsauken. Qualifying five boats was an all-time high for the boathouse team and underscores the caliber of crew members coming from the nationally recognized course. The Cooper River is also the home to the largest USRowing event in the history of the organization.

The boathouse will host its next big event, the 2017 Cooper River Dragon Boat Regatta, on July 29.