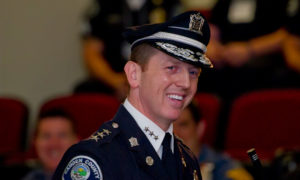 (Camden, NJ)- Camden County Freeholder Director Louis Cappelli Jr. today announced that County Police Chief Scott Thomson will retire at the end of August after serving the City and county for 25 years. Chief Thomson, who rose through the ranks to become Chief of Police, led the transition of Camden’s police force from city to county control and the transformation of the county’s force into one of the nation’s most widely lauded public safety agencies for its dramatic reduction in crime and reset of relations between the police and the community.

Former state Attorney General, Anne Milgram, talked about the original appointment of Thomson, at the age of 36, to the top law enforcement job in the city.

“Scott was the right choice at the right time because he had a vision, the ability to execute, and the accountability that was needed to transform policing in the city,” Milgram said. “He prioritized fair and just policing in Camden to rebuild broken relationships with the community and strengthen bonds with residents. No one is more responsible for the city’s improvements and enhancements than Scott.”

The Freeholder Board and Governor Chris Christie swore Thomson in as the Camden County Police Department Chief on May 1, 2013 and crime rates in Camden have fallen every year since.

“Everyone who lives in, works in, or cares about the city of Camden owes Chief Thomson their thanks and deep gratitude,” Cappelli said.  “People know that statistics only tell part of Camden’s story, but the real evidence of Scott’s impact is the fact that children are back playing in Camden’s streets and there’s a new spirit of cooperation between the police and the community. Chief Thomson wasn’t just focused on fighting crime; he was focused on rebuilding our community.”

Chief Thomson began his policing career in 1992 as a summer police officer in Avalon, NJ.  In 1999, he was named the Camden County Narcotic Detective of the Year and spent nearly a decade working on the HIDTA federal narcotic task force with the FBI and DEA targeting the most violent drug gang organizations in the city. In 2008, he was named Chief of Police for the City of Camden at a time when the force was still under state control by then-Attorney General Anne Milgram. At the age of 36, Thomson was the youngest police chief in the history of Camden.

“It’s been an honor and privilege to know him and work with him. He is one of the brightest young police professionals in the business not just locally, but nationally,” Ramsey said. “He is an effective leader and someone that will continue to lead as an extraordinary police executive.”

Committed to officer accountability and community policing, Thomson changed the culture of law enforcement in Camden and is cited several times in the President’s Task Force on 21st Century Policing which President Barack Obama officially released during his visit to the city in 2015. Thomson was then elected President of the Police Executive Research Forum where he led the international organization of more than 3,000 police executives for four years, addressing the most challenging community and safety issues in the country.

Executive Director of the Police Executive Research Forum, Chuck Wexler, spoke about Thomson’s commitment to community interaction and engagement being a game changer for the city.

“Through true leadership and vision Scott Thomson has shown what can be done in a city that was the most violent in America,” Wexler said. “Today, Camden is a different place than it was 10 years ago. Scott’s success was constructed through his laser like focus on building trust, engaging the community and having a real dialogue with residents. He proved that Camden could be a different place and didn’t have to be a violent city.”

Tawanda (Wawa) Jones, founder and executive director of the Camden Sophisticated Sisters, talked about her experiences with Chief Thomson.

“This is a very bitter sweet moment for me, Scott has always gone above and beyond for my organization and anytime we have needed him he’s been there,” Jones said. “I’m blessed to be part of his life and I’m blessed to have him engaged with our board and the children of Camden City.”

Thomson will continue to work in the community and after his retirement will be taking on a more prominent role as a board member with Camden Sophisticated Sisters and volunteer with Guadalupe Family Services and other non-profit organizations who help Camden’s youth.