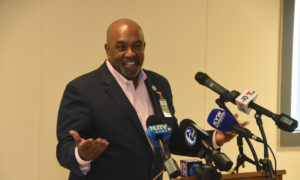 (Camden, NJ) – Sixty-five percent of the country’s prison population suffers from a drug or alcohol addiction. After leaving prison, many offenders are prone to dangerous relapses and an increased risk of overdose as tolerance levels for drug use differ greatly from pre- to post-incarceration. In an effort to reduce recidivism and help inmates successfully re-enter their community, the Camden County Jail is offering Medication Assisted Treatment (MAT) to inmates during, and after, their incarceration.

“We’re seeing the need for treatment among offenders grow at unprecedented rates, outpacing any other group in the United States. Meanwhile, according to the National Center of Addiction and Substance Abuse, only 11 percent of inmates suffering from addiction receive treatment nationwide,” said Freeholder Jonathan Young, liaison to the Camden County Department of Corrections (CCDOC). “MAT has proven to aid successful re-entry across the country, and by expanding our existing treatment services, we can make sure offenders in our community have a meaningful second chance after incarceration.”

In 2018, the New Jersey Department of Corrections awarded the CCDOC $200,000 to expand its MAT program. Those funds are designated for MAT training, contracts with community-based post-release coordination services providers, and the purchase of consumable medication supplies including Vivitrol, Suboxone, Methadone and Narcan.

The MAT program starts for individual inmates as soon as they enter the facility. Every person committed to the jail receives an on-site medical evaluation including an assessment for substance and alcohol abuse. Inmates who are identified as suffering from an addiction may then agree to receive treatment while they serve their sentence.

The CCDOC initially estimated that approximately 100 or more individuals will receive treatment within a year of the program’s implementation. For treatment with Vivitrol, an extended-release, one-a-month injection that helps to prevent opioid relapses, the jail estimates that most inmates will only need one dose while they’re incarcerated, and potentially one dose as a release medication. Vivitrol is the primary medication used in MAT.

After leaving the jail, all successful program participants will be connected with Project H.O.P.E. (a nonprofit organization dedicated to improving the health and wellness of those in need) and either the Volunteers of America (VOA) Safe Return Program or the Camden County Co-Occurring Reentry Program, for reentry services and continued medical treatment and counseling. Both Project H.O.P.E. and VOA have contracted with the jail to provide these services.

“Reports have shown that the areas surrounding the jail are burdened by high unemployment and poverty rates, as well as a high number of uninsured and medically underserved residents,” Young said. “These factors can already hinder the reentering offender population, but we know that they also greatly affect the ability of those with a history of opioid misuse to achieve recovery. By connecting those individuals with support services in the community upon their release, we can significantly improve their chances at a successful rehabilitation.”

Patients who continue the program after leaving the jail will receive a personalized care plan to continue treatment and counseling through Project H.O.P.E. Certified professionals will determine the appropriate level of non-medicinal treatment to accompany the rest of the overall treatment plan.

The CCDOC spent much of 2018 developing and implementing policies and practices for training all key stakeholders involved in the administration of the program. This includes staff training and inmate education. In 2019, the jail will begin integrating the use of Suboxone, a daily-use opioid agonist which helps to reduce use and prevent relapse, for certain inmates.