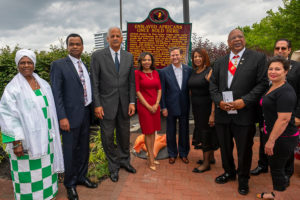 (Camden, NJ) – On Monday, June 17th, Camden County, City and State officials joined representatives from across the political spectrum to reflect upon the abhorrent and violent nature of the country’s slave trade. Together with the Camden County Historical Society, the group unveiled the second of three planned historical markers to be installed at former slave auction block sites in Camden City where African slaves were sold during the 1700s.

With an ongoing debate occurring across the country over the removal of monuments that are dedicated to preserving confederate generals and soldiers, the ceremony was used to pay tribute to the men and women who were transported to the New Jersey shoreline involuntarily, and to reflect on the unjust, ugly institution of slavery in the United States.

“These markers offer a quiet but constant reminder of the dark and inhumane legacy of slave trading along the Delaware River,” said Freeholder Carmen Rodriquez. “My hope is that when people come face-to-face with the reality that this was a practice which took place in their own backyard that they’ll pause to reflect on slavery’s lasting effect on this county and its people.”

The new marker was installed at the intersection of Delaware Avenue and Federal Street in Camden City. The Society previously installed its first marker outside of the Walt Whitman Center in Camden in November 2017. Prominent political and social leaders attended the unveiling to pay tribute to the lives affected by slavery, and to celebrate the contributions of those brought to the United States against their will.

Among the group was New Jersey Secretary of State Tahesha Way, Esq. who talked about the lasting effects of slavery.

“To move our nation forward in healing slavery’s persistent wounds, we have a responsibility to make our racial history visible. This initiative, marking the places where the slave trade occurred within New Jersey, is an important step in recognizing the experiences of enslaved people,” Tahesha said. “As Secretary of State, my office includes the New Jersey Historical Commission, and we are committed to ensuring that these Americans and their stories are included in our shared state history.”

Congressman Donald Norcross also spoke about the push for progress that continues each day.

“We must acknowledge past wrongs as the struggle for equality continues. Thanks to the Camden County Historical Society, these markers will highlight a shameful history that must never be repeated,” said Congressman Donald Norcross.

The project is part of a nationwide initiative to post similar markers at sites of slave trade and related activity. When the Camden County Historical Society unveiled the first of its markers, it was the first to do so following the violent clashes between neo-fascists and counter-protestors in Charlottesville, Virginia, which left one American dead.

“History only repeats itself when we allow the events of the past to be forgotten or fabricated,” Rodriquez said. “I hope that in addition to being a way to pay respect to those lives that were ruined by this despicable practice, this program can be an educational opportunity for those young and old who have been misled to believing that the slave trade was a not a systemic wrong wrought across the entire country in its nascent stages.”

The Camden County Historical Society plans to continue to one more historical marker to memorialize the lives and contributions of Africans brought to the United State. The planned site is located adjacent to Cooper Poynt Park.

Markers to bring quiet reflection, education on the realities of the slave trade