Camden County Freedom Medal to be Presented to 13 Community Leaders 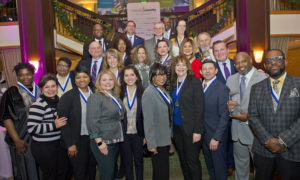 (Cherry Hill, NJ) – Camden County residents will be honored for their selfless contributions to improving their community at the 2020 Camden County Freedom Medal Ceremony.  The award, created by the Freeholder Board in 2001, is presented to civic leaders who demonstrate the ideals and actions that reflect the principles of Dr. Martin Luther King, Jr.

“Each year since 2001, we ask the community to help us identify Camden County residents who exemplify the ideals indicative of Dr. Martin Luther King, Jr.,” said Freeholder Director Louis Cappelli, Jr. “This year we are honoring 14 selfless individuals who have made significant contributions to their community. We gather to celebrate them in hopes of their message inspiring others to serve the public interest.”

The ceremony will take place on Wednesday, Jan. 22, at the Collingswood Ballroom located at 315 White Horse Pike Collingswood, NJ 08107. The reception will start at 5:30 p.m. and dinner will be served at 6:00 p.m. with the award ceremony immediately following. Tickets are available to the public here for $40 each in advance of the event. Tickets are not sold at the door.

Please RSVP your attendance by calling or emailing Scott Petrozza at 856.216.8217, Scott.Petrozza@camdencounty.com

Vedra is a lifelong Camden resident who has made a difference in the quality of life in Camden City, as well as Camden County. In April of 2015, upon returning from a world tour in the field of entertainment, this Harvard graduate began contributing to the city by discreetly visiting communities and picking up litter. Her pro bono work was noticed. She then connected with The Neighborhood Center as a volunteer developing programs for teenagers after school. She helped to establish an after-school program, inviting friends and family members to come and speakto teens about career choices and other meaningful topics. As an experienced entertainer, Vedra has performed for no cost at various free Camden City concerts and assisted in the revival of The Ritz Theater in Oaklyn, NJ. Her active role on the Board of Directors, recruiting, managing and performing, has helped to bring new energy to the theater and the community.

Leona is a Haddonfield resident who started a non-profit called FORGET ME KNOT FLOWERS. The nonprofit’s mission is to share the love that flowers create by redesigning wedding reception flowers into bedside bouquets and distributing them to residents in hospitals, women’s shelters and care facilities throughout South Jersey. Leona and her team personally deliver the bouquets, giving them a chance to see firsthand how making connections through simple gestures like notes, flowers and storytelling uplifts the recipients of these beautifully repurposed arrangements.  Reminding someone they are loved has a physical and emotional impact on people that need it most, like those dealing with loneliness, sickness, terminal illness, or injury.

Harry is a proud lifelong resident of Camden County. Harry has consistently taken on leadership roles while dedicating his personal and professional life to learning how to help those affected by violence, addiction, lack of education, mental illness, and crime. He served thirty-two years with the Gloucester Township Police Department, including the last nine years as Chief of Police. He has served on several boards that have enabled him to create and implement sustainable systemwide changes in Camden County and beyond.  These changes include the development of Project SAVE and creating a program that assists runaway youth and identified victims of sexual exploitation. Harry spearheaded the creation of the Family Resource Center in Gloucester Township where young people and their families can seek free professional mental health services. Harry has also developed a model where those being released on parole, probation, or have suffered a drug overdose are connected with the Camden County One Stop Career Center.  Additionally, Harry led the effort in the passage of a formal IACP 2019 resolution calling on our law enforcement agencies internationally to better understand and develop responses to Adverse Childhood Experiences. Harry continues to give back to his community and work to effect positive change.

Marc is a long-time resident of Cherry Hill and has always loved tinkering with computers as a hobby. Marc donated personal computers to students in need and learned of the immediate improvement they had on their grades and self-esteem. This is the exact moment COMPUTER SMILES was born. Marc rebuilds, refurbishes and reprograms donated computers and gets them up to modern standards. Computer Smiles then gives these computers to students, seniors and families who are in underserved communities and don’t have access to the kind of technology most of us take for granted. Marc has donated over 250 computers to people in need all over the county and even the world; his goal is to get 1000 computers into the hands of people who really need them.

Bishop Harley is a proud, active resident of Winslow Township for over 35 years. He became involved with community programs and was instrumental in coordinating a parade in Winslow Township to speak on concerning violent activities in 1988. He loves to stay active behind the scenes and continues to support many of the community programs. The Bishop is always saying, “I prefer getting behind others and supporting their platform.” In 1994, he became the founder of the Lighthouse of Deliverance Gospel Church in Lindenwold, NJ and in 2013, Harley was elevated to the sacred office of Bishop.

Maintaining a teachable attitude and strong leadership style, Bishop Harley attributes these qualities to a number of mentors. He is a master builder with a background in construction management and utilizes his skills as a tentmaker to help other churches to build in excellence.

Abe and his wife Megan founded the What’s Up in Cherry Hill (Official) Facebook page about seven years ago. The page, with nearly 14,000 followers, is an ongoing neighborly and cordial digital conversation among some of Cherry Hill’s 71,000 residents who live in 26,000 households spread over 24 square miles. Beyond finding out what’s up, Abe wanted a positive Facebook page that connected the community to its small businesses to stimulate the local economy. The page helps to bring the community together for guidance, advice and for business recommendations based on their neighbors’ experiences.

Mary Anne is a long-term resident of Pennsauken whose commitment to service has had her involved in grassroots initiatives and leadership roles for three nationally recognized organizations.

Mary Anne was a member of the Woman’s Club of Merchantville and an integral part of winning many of the awards they received at state conventions. She chaired the Home Tour and established the long-standing Operation Santa.  Mary Anne was a long-term troop Leader for Boy Scouts in Merchantville, Pennsauken and Haddon Heights, having a great impact in the region by fostering future leaders. She was instrumental in the lives of countless young leaders, supporting at least 20 young men as they worked for and achieved the rank of Eagle Scout, the highest rank in Boy Scouts, and is still active in the Scouts today.  Mary Anne currently serves on the Lions Club of Pennsauken and has been the Secretary and Sight Chairperson for the Pennsauken School District for the last decade.

Ian comes from a family who believes in being of service to others and serves his community of Lindenwold in surrounding areas in many capacities. Every week, rain or shine you will find Ian serving meals to those in need throughout the County from Camden County Department of Health and Human Services “Meals on Wheels”, Lindenwold’s “Neighbors Who Care Organization”, Lindenwold Senior Community Center to the S.P.C. Anthony J. Dixon Veterans Center in Berlin. Ian is a member of several local organizations and participates in community service projects such as flagging veteran graves and working with the scouts. He sits on several LGBTQ+ Boards throughout the region. Ian is often seen playing Santa Claus, holding Easter Egg hunts in the park, delivering groceries, stuffing book bags for Back to School Drives or buying blankets for the homeless.

Orlando is a lifelong resident of Camden who chose to make his mark on the city’s future by dedicating his adult life to helping its youth. Since 1987 Orlando has been a faithful coach and mentor to the players of the Centerville Simbas football team, organizing countless fundraising events and often paying for much needed sports equipment from his own personal finances. Orlando has spent hours mentoring high school students from Camden High, Vets Memorial, and Woodrow Wilson High School.  Recently he has added escorting the high school students he mentors on several HBCU college tours. While maintaining a successful career of over 30 years and raising a son with his wife of approximately 20 years, Orlando has proven his dedication to his family and the community by never shying away from a call for help from a citizen in need.

Rubab has been living in Voorhees since 2013 and is passionate about making a difference in her community by promoting diversity. Rubab provided unselfish support in organizing fundraisers for National and International disasters like Tsunami, Sandy, Katrina, Earthquake in Pakistan, Cyclones in Bangladesh etc. Rubab is a very active, vibrant and credible member representing Pakistan American Society of South Jersey as Executive Committee Member and as a member of Pakistan American Congress and has been very instrumental in raising donations for the homeless in Camden for the last five years. Through Pakistan American Society of South Jersey, she was able to connect with outreach programs for people in need; most of which were in Camden. She has also been providing love, compassion and humanitarian support including personal financial assistance to those in need and visiting Rehabilitation Centers with her family in Camden County.

Dominic is a resident of Gloucester Township and has served Camden County and the South Jersey region for decades. His work in many roles represents the spirit of Martin Luther King, Jr. by endlessly giving back as part of both his career and personal life. Professionally, Dominic has long been active in South Jersey with a distinguished twenty-seven-year career with Camden County, where he was able to significantly impact the lives of residents through a variety of programs.  Personally, he is passionate about making a difference in his community as President of the Paul VI High School Alumni Association, and the Greater Wildwood Fraternal Lodge of Elks No. 1896. Many years ago, he organized and started a Thanksgiving Meal program that fed over 2,000 individuals this past year alone. Perhaps most notably, Dominic was a founding member and one of the driving forces behind the creation of the Camden County Addiction Task Force. Started in 2014, the task force’s successes include expanded access to treatment, community summits, a widespread education campaign, candlelight vigils, the birth of a sports recovery league, and a program that equips every police department with the overdose reversal agent, Naloxone – resulting in thousands of saved lives. In 2017, he was awarded the County Service Award from New Jersey Association of Counties.

After several hospital encounters with uninsured patients, Dr. Jubril Oyeyemi of Virtua Memorial Hospital founded The Cherry Hill Free Clinic; a nonprofit organization providing healthcare services to those who do not currently have health insurance or who are underinsured. The clinic’s mission is to provide free primary care to the uninsured of South Jersey. The clinic is staffed by a diverse team of passionate volunteers and hugely supported by local community organizations and health systems. By leveraging resources around, the Clinic is able to provide quality care with access to lab, radiology and specialists while completely removing the barrier of cost.

Oyeyemi and a team of 30 volunteer doctors and nurses have served about 750 patients and held more than 1,500 appointments on weekends at the clinic, in a small office tucked into a building with a mosque and an aquatics center. The clinic aims to provide free compassionate preventative medical care to the uninsured and underinsured. To provide a safety net for those who have fallen through the cracks of the healthcare system.