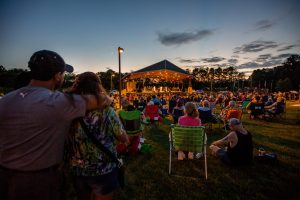 “Each summer, we see more visitors come down to the Camden Waterfront for great entertainment like the Fourth of July Concert and Fireworks and Sunset Jazz Series,” said Freeholder Ed McDonnell, liaison to the Camden County Department of Events and Community Outreach. “This year’s diverse lineup of performers ranges from jazz greats to string bands. Bring a lawn chair or a blanket because you don’t want to miss any of these outstanding free concerts.”

Celebrate Independence Day this year at the Camden County Freedom Festival at Wiggins Waterfront Park featuring Eddie Money and The Spinners, followed by an incredible firework display over the Delaware River. Eddie Money’s decade-spanning career produced classic rock anthems including “Take Me Home Tonight,” “Two Tickets to Paradise,” and “Baby Hold On.” The Spinners brought us chart topping hits such as “It’s a Shame,” “I’ll be around,” and “Games People Play.” They’ll take the stage at 6:30 p.m., followed by Eddie Money at 8 p.m. before the fireworks spectacular over the water at 9:30 p.m.

This year’s Twilight Concert Series at Cooper River Park features the Atlanta Rhythm Section, the southern rock band that brought us “So into You,” and “Spooky,” and Rock and Roll Hall of Fame recording artist Darleen Love and her hits “He’s a Rebel,” and “The Boy I’m Going to Marry.” The Sundown Music Series has Grammy-Award-nominated blues and folk singer-songwriter Ruthie Foster, and Orleans bringing their hits “Dance with Me,” and “Still the One.”

“All of this entertainment and more can be found in the 2018 Camden County Events Guide that will begin arriving in mailboxes early next month,” McDonnell said. “In the guide, you will find all the information your family needs to plan a great summer with entertainment that’s hard to beat. In addition to concerts, there are festivals, sporting events, programs for individuals with disabilities and much more.”

This year’s concerts include:

At the foot of MLK Boulevard, Camden City

All concerts start at 8 p.m.

All concerts start at 8 p.m.

July 19 – Broadway, Opera and Beyond

All concerts begin at 7 p.m.

Attention editors:  pictures and interviews can be provided.