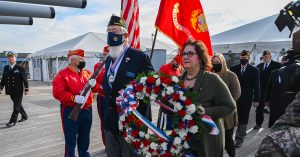 The Board of Commissioners and other local officials gathered on the Battleship New Jersey on Tuesday to honor the 80th anniversary of the attack on Pearl Harbor, a military base on the island of Oahu, Hawaii. Within just two hours, 18 US warships had been sunk or damaged, 188 aircrafts were destroyed and 2,403 American servicemen and women were killed. The attack marked the beginning of the United State’s involvement in World War II.

“This event is meant to honor the survivors of that day as well as pay tribute to all veterans who lost their lives for this country,” said Commissioner Melinda Kane, who also serves as the liaison to the Camden County Office of Veterans Affairs. “As FDR said, December 7 is a day that will live in infamy. It was a day that our country, and the entire world, changed forever. Countless brave men and women made the ultimate sacrifice that fateful day and this event is the least we could do to show our respect for their bravery.”

The highlight of the event was the presentation of the Peter Molnar Award to Bernie Kofoet, the incoming Commander of Camden County Veterans Advisory Committee. The award is presented yearly at the Pearl Harbor Ceremony and is presented to an individual who has been significantly involved with veterans activities in the county and across the state.

Kofoet is currently a member of the American Legion FW Grigg Post #68 where he serves as their finance officer, public relations officer and historian. He also serves in various positions within the American Legion at the district and statewide levels. In September, he represented the American Legion in the county’s 20th anniversary of the 9/11 Remembrance and has been very instrumental in serving veterans in need through various Stand Down Events.

“Bernie goes above and beyond to serve veterans in Camden County and across the state of New Jersey,” Kane said. “His service is instrumental to the overall well being of our veterans and for that, we honor him with the Peter Molnar Award.”