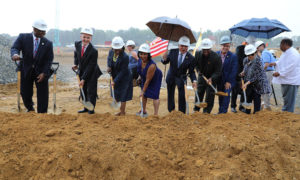 McCombs talked about the impact of the new school on students, families and the city.

“Today is a monumental day for the Camden City School District,” McCombs said. “This is sacred ground. Countless students, educators, families and community members are deeply connected to this land. As Superintendent of this district, my own personal roots are tied to this land. I can remember fondly my formative years as a student here at The High.”

McCombs, who grew up in Camden and attended Camden City schools, also emphasized the message that her team is hoping to instill in Camden’s students.

“The academic and social preparation I received on this ground served me well.” McCombs said. “I was able to successfully earn degrees at Lehigh University, Columbia University and Rutgers University. Why? Because on this ground, I was taught by my teachers and Principal, the Late Riletta T. Cream, that there was nothing that I could not accomplish if I applied myself.”

The approximately 242,000 square-foot facility will accommodate students in grades nine through 12. The project is being funded by the New Jersey Schools Development Agency and is expected to be completed by September of 2021. Camden High, or as it is known, the Castle of the Hill, was demolished last year, at more than 100 years old, to make room for the new state-of-the-art facility. Camden High’s students have been attending classes in a temporary capacity at Hatch Middle School.

Camden Mayor Francisco “Frank” Moran highlighted the opportunities that will be unlocked for students once they have access to a 21st-century educational setting.

“Beyond the bricks and mortar, today’s groundbreaking signifies an investment in our city, our residents, and our Camden youth,” Moran said. “It also brings with it the promise of opportunity and the promise of a bright future for our residents and for future generations of Camden residents. It’s an opportunity for students to receive a quality education, which can help propel them to college or university or a career. Students will now be able to blaze their own path and build upon the rich history of The Camden High School.”

The new high school was first announced in 2016 as part of Governor Chris Christie’s commitment to Camden’s growth. The Governor and his team had originally planned an extensive renovation for Camden High, but ultimately concluded that it would be more cost effective to demolish the building and replace it with a state-of-the-art facility than to renovate the century-old school. Camden High was severely outdated by the end of its lifespan and lacking in modern technologies and accommodations.

“In this new state of the art high school, we look forward to providing future generations of Camden High Students even greater opportunities, motivation, support and exposure to academic and athletic excellence than I experienced. Breaking ground on the new Camden High is especially significant at this time of year,” McCombs said. “As our seniors across the city prepare to graduate on Friday, and as our school year comes to a close, it is time to move our educational system forward— ensuring equity and quality learning environments for all of our children in Camden. Breaking ground on a new Camden High School marks that forward motion.”