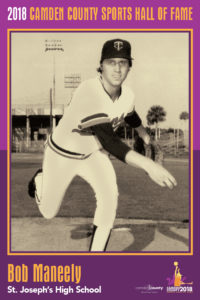 For a small school with only a few hundred students that closed its doors decades ago, St. Joseph’s High School in Camden has two former sports stars in Bob Maneely and Charlie Blank who are being inducted into the Camden County Sports Hall of Fame.

Maneely first made the sports pages at the age of 11, when he pitched for the Deptford Little League all-stars and fired a perfect game against Monroe Township in the District 13 finals. In future years, Maneely and his golden arm would be mentioned frequently.

He was drafted out of high school by Kansas City, but chose instead to attend Frederick Military Academy, a prep school. He signed with the Chicago Cubs in 1970 and played ball in Caldwell, Idaho, a Class A team in the Rookie League. Maneely got off to an excellent start in his pro career with a 9-4 record and made the all-star team. He started the next season in Quincy, but moved up to AA with the San Antonio Cubs and compiled a record of 5-2 there.

Maneely was traded to the Minnesota Twins and opened the 1972 season with Midland, but experienced elbow problems, the bugaboo for pitchers, for the first time and sat out most of the season. But he recovered well and played the 1973 campaign with the Orlando Twins. There he was Southern League Pitcher of the Year with a record of 14-7. In 1974, however, he was operated on for a torn rotator cuff, and spent most of the next two years rehabilitating,
He then signed with the Twins’ top farm club, the AAA Tacoma Twins, but later that year had a recurrence of the shoulder injury while in South America and decided to retire from baseball. During the off-seasons, however, Maneely took courses at Mesa Community College and Miami-Dade College to prepare for a post-baseball career.

Maneely’s most memorable sports experience, however, was not in baseball nor even basketball. It was winning several club championships in golf, notably defeating one of the finest golfers for the championship of the Merchantville Country Club. He knocked in a birdie on the 36th hole to defeat Bob Heindel for his greatest thrill.

He had his own insurance agency in Gloucester Township for 30 years, but sold it recently. He still holds an insurance license and sells it through the McGlone Agency. Maneely was inducted into the South Jersey Hot Stovers Hall of Fame in recent years.

He has been married for 45 years to a girl who answers to Nealie Maneely (try pronouncing that ten times quickly). The couple has two sons: Kenneth, who lives locally, and Robert IV, who resides in Santa Fe, New Mexico. Both are married and have given Bob and Nealie five grandchildren.