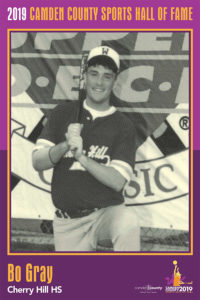 Bo achieved early success in baseball as a pitcher with the Cherry Hill Babe Ruth Team, who were National Champions in 1989. The Babe Ruth World Series was held in Cranston, RI. Bo was selected to the All-Tournament Team. Bo regarded his Babe Ruth coach, the late, great Ed Foley, as an outstanding teacher and mentor.

Bo was a member of the Cherry Hill West baseball team, who were four-time State Champions from 1989 – 1992. During his high school career, Bo earned numerous accolades. He was named 1990 All-Conference and All-South Jersey; 1991 All-Conference, All-South Jersey, All-State and was a Carpenter Cup Champion; and 1992 All-Conference, All-South Jersey, All-State and All-American. Bo was the star pitcher and hitter named to the All-Tournament team winning the National Upper Deck Classic, held at Cal State – Fullerton College Field in Anahiem, CA. The last batter he faced and struck out was a player from the Westminster H.S. Squad (Miami) by the name of Alex “A-Rod” Rodriguez.

Bo finished high school with a pitching record of 30-0 and was subsequently drafted by the Phillies in the 32nd round. He instead elected to attend Temple University along with three other members of his high school team. Bo left school at the end of his sophomore year after sustaining an injury to his pitching arm.

Currently, Bo is the director of Post 372 Cherry Hill American Legion Baseball. He also serves as a coach and instructor at Scanzano Combat Baseball Academy. Bo has worked at TD Bank for 20 years as a Senior IT Manager V.P. and manages a team of 23 employees globally. Bo also played slo-pitch softball for four years for the nationally ranked Deluxe Bakery of Runnemede Tournament Team under the leadership of Sam Racabaldo, a great sponsor who has kept excellent teams competing and winning tournaments throughout the country for many years.

Along with his continued involvement in baseball, Bo enjoys watching his four children play baseball, softball, soccer, basketball and field hockey. Surf fishing is another one of his interests. Bo is married to Karen, another Cherry Hill West graduate. He says that she is his “rock” and without her handling a great share of the family duties and helping with his many activities, it would not be possible for him to be so involved with his hectic schedule. Bo and Karen are the very proud parents of: Bo – studying music and computer science at RCBC Rowan College, Burlington County; John – an outstanding baseball player and member of the 2018 Cherry Hill West SJ Group III Champions; Cora – a soccer and field hockey player at Carusi Jr. School as an 8th grader; Lila – a softball catcher, basketball and soccer player in the 7th grade.

Bo says he is a happy man with no regrets and is very content to continue coaching baseball. At the end of the day, he truly believes it was his calling.