A Statement from Freeholder Cappelli, Jr. on the Passing of President George Herbert Walker Bush 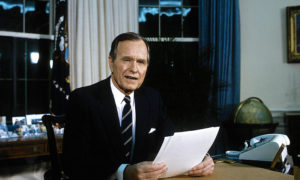 “President George Herbert Walker Bush was a man of uncompromising character who led our nation and was defined by his dedication and commitment to public service. Whether it was as a war hero as one of the Navy’s youngest pilots during World War II or as the head of the CIA or serving as a congressman, the 41st President dedicated his life and the life of his family to serve the United States of America. His pragmatism, integrity and wisdom will be missed, but one thing is for certain the world is a better place because of him. The Freeholder Board will be flying all flags at half staff to pay tribute to a lion of the greatest generation. Our  thoughts, prayers and sympathies go out to the Bush family today.”