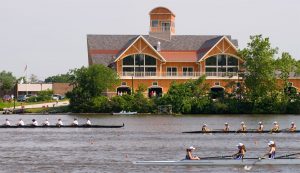 (Cherry Hill, NJ) – In May 2023, the 84th Annual Jefferson Dad Vail Regatta will be held on the Cooper River, moving from its typical venue at the Schuylkill River National Racecourse. Cooper River Park in Pennsauken home to many prestigious rowing events and boasts a world-class, Olympic-distance, 2000-meter narrow and sheltered straightaway.

“Hosting the Jefferson Dad Vail Regatta is a great honor for us and our internationally recognized racecourse at Cooper River Park,” said Commissioner Jeff Nash, liaison to the Camden County Parks Department. “We are looking forward to hosting the thousands of world class athletes and the more than 30,000 fans who annually participate in the biggest collegiate regatta in the nation. We can’t wait to roll out the red carpet for the rowers, staff and fans in 2023.”

Cooper River Park will also be hosting the following regattas for the 2023 season: