Kirk Mango, the author of a book titled, Becoming A True Champion: Achieving Athletic Excellence From The Inside Out, makes the point in his writing that it has been his observation that, “greatness, whether athletic or otherwise, doesn’t come from those content on just being, but from those who seek being the difference.” Now the author penned his book 10 years after Megan Light-Mason had played her last collegiate game to cap off an amazing athletic career, but he certainly has described the mindset of the young woman being inducted into the Camden County Sports Hall of Fame.

Megan, a 1998 graduate of Gloucester High School, was a four-year starter on the varsity field hockey, basketball and softball teams. To be a fall, winter and spring varsity letter winner is a special accomplishment to be proud of and be recognized for. Annd for an athlete to do it all four years of high school and earn 12 varsity letters without a hiccup is a rare occurrence, to be sure. But to do it all four years and to be named the team’s MVP at the end of each and every season; well that is just an incredible feat when you take a moment to consider the enormity of the accomplishment.

That type of high-level steady performance brings with it awards and honors beyond what Megan’s teammates, and the Gloucester Lions Athletic Department can bestow upon her. During her scholastic career, Light-Mason was named to the First Team All Tri-County Conference, 12 times. Megan was tabbed for First Team All-South Jersey honors a remarkable 10 times; she earned First Team All-State accolades, six times; and was selected as the Athlete of the Year her senior year by the Camden Courier Post and the Philadelphia Inquirer. 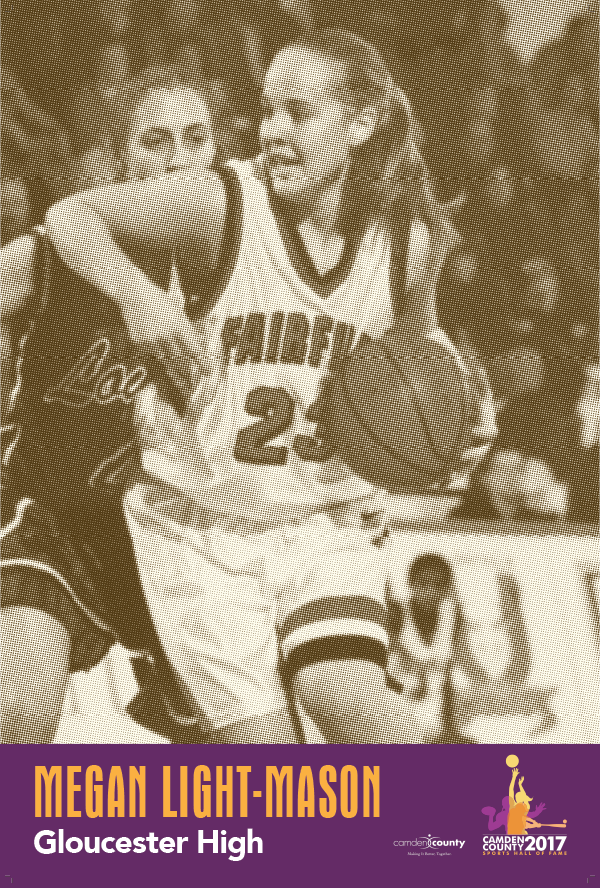 The public high school in Gloucester has produced many great athletes and numerous notable teams in its 89 years of athletic competition. And with all schools that can boast of great athletic traditions, invariably the conversation turns to which athlete was the best. Now because sports beauty is in the eyes of the beholder, and good people can have honest disagreements, the debate may rage about who the best male athlete at Gloucester was. But on the ladies side, the discussion is over before it begins.

“People can debate all night long who was the best male athlete ever to play at Gloucester High, “ said former Gloucester High School teacher and coach, Joe Gorman, “but the best female athlete debate lasts for as long as it takes for someone to say Megan Light’s name. Megan truly earned the description, “superstar.”

Megan finished her scholastic basketball career as the Lions all-time leading scorer with 2,443 points in basketball; she finished with a healthy .530 career batting average in softball and led her field hockey team to a Group 1 state championship.

Upon graduation from Gloucester, Megan took her talents to Fairfield University where she scored 1,169 career points and dished out 400 assists for the Lady Stags and earned All MAAC Conference honors while helping her team to an NCAA tournament appearance in 2001.

Today, Megan Light-Mason is a devoted mother, wife, teacher, coach and referee, and shares her time and talents with her family, friends, students and players. She is undoubtedly author Kirk Mango’s text book definition of the champion who continues to achieve excellence from the inside out.