Jenn was a three-sport athlete at Highland High School lettering in soccer, basketball and softball.  Captain of all three sports, Flinny was a two-time All-Conference selection in soccer and three-time All-Conference selection in softball.  Arguably one of the best softball players in Highland High School history, she earned All-South Jersey honors, surpassed 100 hits and swiped over 100 stolen bases. Her on-base percentage and fielding percentage are still tops on the record books.  Jenn was named outstanding Female Athlete her Senior year and was recently named as one of Highland’s 50 for 50. 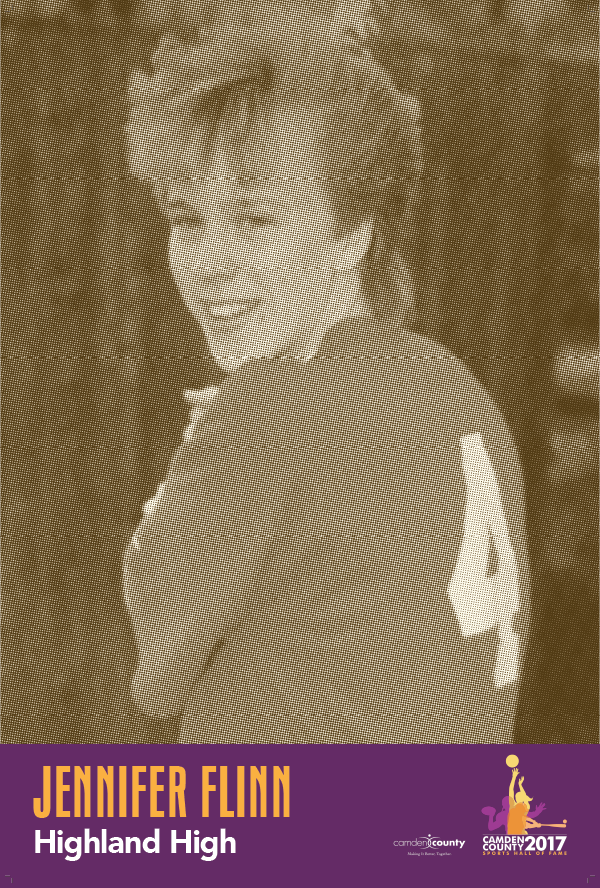 Jenn continued softball at Montclair State where she graduated with a degree in Health and Physical Education.  Flinn established herself as one of the best players to don a Montclair State softball uniform. The NJAC Rookie of the Year in 1992, Flinn made her impact immediately helping the Red Hawks to the NCAA Division III Softball Championship where Montclair finished third. The following season she earned the first of her three All-American honors as she batted. 389 with 38 runs scored and 12 stolen bases. In 1994, Flinn put together one of the great seasons in MSU history as she batted .500 with 76 hits and 57 runs scored – all single season records. She capped her career in 1995 by batting .342 with 71 hits and broke her own mark for runs scored with 59 while also swiping 24 bases as she garnered her third straight All-American accolade. A three-time All-NJAC selection and four-time All-Region pick, Flinn, who helped MSU to four consecutive NCAA Division Regional Tournament berths, batted .432 with 253 hits, 40 doubles, 10 triples, 190 runs scored and 53 stolen bases. She still holds the MSU career records for batting average, hits, and runs scored and is second in on-base percentage (.478) and total bases (322).

She continued her softball career at Montclair as an Assistant Coach from 1996 to 2002.  While coaching, the Red Hawks were 7-time ECAC Division III champions.  Considered as one of her most memorable sports moments Jenn appreciates her experiences in the NCAA Division III World Series as both a player and a coach.

Flinny was inducted into Montclair State University Athletics Hall of Fame in 2006.  She is still on the leader board for many categories at Montclair including hits, runs scored and batting average.  Recently, Montclair recognized both the 1992 and 1997 squads where Flinn was a player and coach respectively.

In 2016, Jenn was also inducted into the Highland High School Hall of Fame for her athletic accomplishments.